Appointment with us Today!

One may clearly notice the visible signs emanating from your swollen and bleeding gums, ultimately propelling your attention towards your gums infected with bacteria. This infection can spread, if not treated immediately. It may cause damage to the structures supporting your teeth in your jawbone. Eventually, making your teeth to become so loose that they have to be extracted.

The interchangeable terms “gingivitis” and “periodontitis” have led to the utter confusion among dental patients and they look towards their dentist for better awareness and significant treatment. 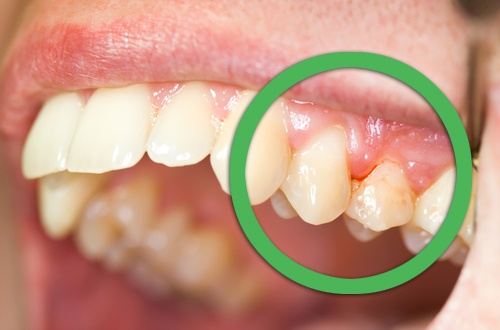 Excess plaque on the teeth leads to an inflammation of the gums resulting in gingivitis. The symptoms of gingivitis include red, swollen gums, or bleeding of gums while brushing your teeth. As compared to periodontitis which is referred to as more chronic gum disease resulting from the bacteria in the dental plaque. Plaque is the sticky substance that surfaces on your teeth soon after you have brushed your teeth. In a continual effort to get rid of the bacteria, substances are released from the cells of your immune system that inflame and damage the gums, periodontal ligament or alveolar bone.

The symptoms of periodontitis can be seen when the gum tissue gets withdrawn from the teeth leading to the formation of pockets where additional bacteria can surface and cause an infection. Visible signs of periodontitis can be seen from red, swollen or bleeding gums, pain when chewing, poor tooth alignment, receding gums or pockets between the teeth and gums, sores on the inside of the mouth, and loose or sensitive teeth.

The broader difference can be seen as under:

One should effectively take care of their teeth and gums while brushing and flossing and by using a fluoride toothpaste as it avoids in the formation of tarter between your teeth and the gumline. Periodontal Treatment in Commerce looks after your periodontal treatment and helps you to overcome your tooth decay under the hands of professional cleaners i.e. your dentists who will encourage you always to maintain proper oral care.